Author and occult researcher Oliver Bowes had always been fascinated by the Golden dawn - the legendary Victorian magickal order whose members include Dion Fortune and Aleister Crowley - but like most modern occultists he was intimidated by the complexities of the rituals.

NOT ANYMORE!
After years of research and pouring through dusty old texts, trying to unravel the Order's secrets, he was visited by its Guardian and received a blinding vision of its secrets!
Thus began the author's roller coaster ride into a new world of power... riches... and every type of blessing!
THERE IS NOTHING LIKE IT!
NOW - FOR THE FIRST TIME - THE POWER AND WEALTH HUNGRY CAN USE THESE LEGENDARY SPELLS AND RITUALS!
Never again need you want for anything!
Invoke the sacred squares of planetary gods! They will work wonders for you!
BANISH EVIL AND BAD LUCK FROM YOUR LIFE!
Open your life to an endless stream of riches and blessings!
YOU WILL BE ASTONISHED AT THE POWER YOU RECEIVE AT THE RESULTS YOU WILL OBTAIN!
A woman faced with both bailiffs and eviction over unpaid credit cards was saved when she invoked the powers of the Golden Dawn!
THESE SPELLS AND RITUALS ARE SAFE AND SIMPLE TO USE!
Never have the legendary spells and rituals of so powerful an Order - the Golden Dawn - been made so simple!
NO-ONE CAN RESIST YOU WHEN YOU USE THESE POWERS!
You can bind your lover to you... she or he will never want to leave you!
Yes! You can command another person's undying love and loyalty with this astonishing power.
THEY WILL GIVE YOU WHAT YOU WANT - GLADLY AND WILLINGLY!
At last - you can have an irresistible power at your finger tips!
YOU CAN GUARANTEE THE SUCCESS OF ANY UNDERTAKING WITH THESE AMAZING OCCULT WORKINGS!
You will never look back!
One South Wales man won £39,000 in racing bets in three weeks!
A Yorkshire woman, without capital, started a tiny business after taking the Golden Dawn oath. No one thought she stood any chance of making money. She prospered quickly. From working at home to owning three salons, took her just nine months!
Mr Bowes has simplified the Golden Dawns formulae to such a degree that anyone can perform the spells and rituals effectively!
All you need is commitment and belief - both easy to possess when you already see results so quickly!
YOU CAN HEAL YOURSELF OF MENTAL AND PHYSICAL HEALTH DISORDERS!
A Leeds man suffered years of acute depression coupled with anxiety attacks. No amount of counselling helped; medication didn't work.
WITHIN THREE DAYS OF PERFORMING A LEGENDARY GOLDEN DAWN SPELL HE FELT LIKE A NEW MAN. Six months later his whole life had turned around, having started a thriving business and finding the woman of his dreams!
Allow the planetary gods and angels of the Golden dawn to turn your health around!
Petition these powers for help and watch the results!
MAKE BAD LUCK A THING OF THE PAST! These holy powers make you invulnerable to psychic attack and the malicious intent of others.
THESE HOLY POWERS CAN BRING A CHARMED LIFE AND PROTECTION FROM HARM AND MISHAPS. Protection for not only yourself but also your loved ones!
Invoke, petition and pray to these powers for your wishes, AND YOU WILL BE HEARD.
Some of the contents of this booklet: The Prayer Unto the Great God of Heaven... The Holy Oath of the Golden Dawn... The Magickal Boxes of the Gods and Angels... The Sex Spell Which Cannot Fail (was this the source of Crowley's uncanny hold on women?)... Money Attraction... Evocations for Protection.

This is a Black Magic Book. 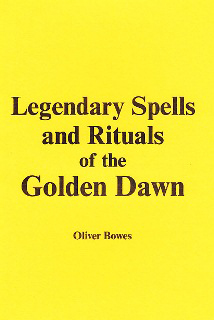