Back to - Mind Power

•On the day after using the Ten-Day ‘Money Miracle’ Technique J.D. found 7 crisp £20 notes in her kitchen drawer!
•A.T. used the formula and two days later received a cheque for £7995 from a totally unexpected source!
•‘I was at the Tijuana races’, wrote D.M. ‘The day before I tried your formula. The numbers 7 and 8 came flashing in my head. I took the hint, hurried to the window and bet $20 using these numbers. I came away with $1602!’
•S.W. needed £150,000 to save his ailing business. The banks were less than helpful. Feeling he had nothing to lose, he turned to the Ten-Day Technique and received the full amount needed in nine days!
Author J. Pike stumbled on this formula after he appealed to a Higher Power to help him in his plight. He was at the lowest point in his life. Penniless, he had no income of any kind, not even welfare benefits. Not even a roof over his head, depending on the kindness of others. To top it all he feared for his safety, for he had to pay a loan shark in two weeks or face unpalatable consequences.
In a flash he got the idea for the ‘Ten-Day Technique’. Four days later he received a gift of £800 cash right out of the blue!
It was the beginning of a turn around in his fortunes. Since then he has never looked back, knowing that money will always be there when he needs it. And always within ten days.
Though new to the author, the technique is based on something as old as the ancient Egyptians, its effects being truly ‘miraculous’. You need only to believe in this miraculous technique and the Universe will do the rest.
Believing becomes easier and easier as the effects mount up.
THIS MYSTIC TECHNIQUE IS SIMPLICITY ITSELF. Absolutely safe, infused and inspired by Higher Powers.
It lifts a burden from your shoulders. An end to financial struggle.
R.H. happily reported winning £500, £900 and another £900 in three consecutive weeks, each time as a result of this formula. This was all through bingo. ‘Now I am out of debt and have a savings account … my income is now growing and things are looking up for the first time in years’.
The principle of Cosmic Supply is unchanging and constant. This principle is open to all of every belief, be it Christian, Muslim, Hindu or Jew – the principle remains the same. Yet so many live in ignorance of it. THE TEN-DAY MONEY MIRACLE TECHNIQUE IS UNIQUE to this publication, for it is based on the author’s own unique discovery.
IT MATTERS NOT HOW DESPERATE ONE’S SITUATION, WHETHER ONE HAS NO JOB OR INCOME, NO PROSPECTS, NO MEANS OF RAISING CASH. This technique gets a result. Within ten days.
It seems truly ‘miraculous’, but it is just the operation of Cosmic Supply.
Believe in its availability and it is there. THE TEN-DAY ‘MONEY MIRACLE’ WILL AMAZE YOU.
There are no difficult rituals to perform; nor hard visualization. You are shown in an instant how this wondrous power can be at your disposal.
Disbelievers may scoff, but then maybe they never were as desperate as the author once was or as the many who have applied the technique and benefited.
Within ten days of receiving this unique formula your crisis may be over.
In the author’s view it’s a certainty. ‘IT DOESN’T FAIL’, he says. ‘IT WORKS AS CERTAIN AS THE BEATING OF YOUR HEART’.
Such hope and inspiration is here, and all for such little effort. This Ten-Day Technique performs financial wonders over and over … releasing the cash at present withheld from you into your life.
THERE IS NO MYSTERY TO AN ABUNDANT SUPPLY OF MONEY. All around are many people with plenty of money and luck. Why shouldn’t some of it come your way? The supply is there, if you believe.
And your belief will keep growing as you see the results come pouring in.
G.E. reported that she sold her property, making a £71,000 profit, in just seven days – for months nobody had been interested in it!
The Ten-Day ‘Money Miracle’ brings not only money, but also peace of mind, health. An end to worry and anxiety. One can begin to live and enjoy life.
The Ten-Day ‘Money Miracle’ – a technique based on a secret wisdom as old as ancient Egypt. Ready to work for you. 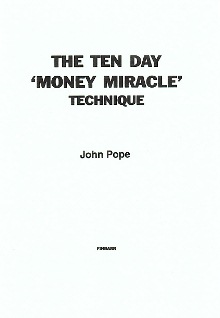