THE SECRET OF IMMORTALITY Science is generally agreed that theoretically, at least, there is no medical reason why people should not live much longer than they do. T. Salar and D.I. Peake, authors of this thought-provoking new book are convinced that there is simply no reason why ordinary men and women should not live to be 200 years of age, and in some cases, LIVE INDEFINITELY IN THE SAME BODY. "You can postpone death...even circumvent it", write Messrs. Salar & Peake. Whilst theoretically the possibility of immortal life is not a far-fetched notion, the sixty-four thousand dollar question is, of course, HOW TO MAKE IT A PRACTICAL REALITY rather than a hypothesis.

This new, controversial book gets right down to grips with creating this reality. "It can be accomplished", say the authors, "...the secret is multi-dimensional, and can be understood and mastered by anyone wishing to take the time to work on it". The person who thinks that no such secret can exist as "no one has ever managed to avoid death" has simply not given any real thought to the matter. "Mankind is deluded in this subject", according to the authors, and add that "It is merely ASSUMED that no one has ever escaped death...and because no one has ever publically announced that he has been living in the same body for many centuries it is simply TAKEN FOR GRANTED that persons of such longevity just do not exist". Interestingly enough there is no way, in spite of its sophisticated technology, in which medical science can actually DISCOVER THE AGE OF ANYONE. In other words, the person of insight can see that the "Immortality Issue" is very much a "Catch 22" situation: longevity cannot actually be disproved, but neither can it be proved! The intelligent, enquiring person will, however, want to KNOW WHAT THE OPTIONS ARE. "You do have a choice about dying", declare the authors. "You have several choices, in fact...death being only one of them".

This extraordinary book looks at those choices. Some of its contents include:

* WHAT "FATE" IS AND HOW TO CONTROL IT

* DETERMINING EXACTLY HOW LONG YOU WANT TO LIVE

* HOW TO GET STRESS, THE GREAT "KILLER", UNDER CONTROL

* HOW TO EXPAND YOUR CONSCIOUSNESS THROUGH UNIVERSAL PSYCHIC ENERGY

* THE NECESSITY OF SECRECY ABOUT A GREAT AGE

* WHAT YOU SHOULD KNOW ABOUT OLD AGE AND DEATH; SOME LITTLE KNOWN OR UNDERSTOOD FACTS

* WHY LIVE FOREVER AND BE POOR? SECRETS OF "WEALTH LONGEVITY" EXPLAINED

* WHAT BOTH SCIENCE AND METAPHYSICS DOESN'T KNOW ABOUT IMMORTALITY

* HOW A POWERFUL NEW METHOD OF SELF-HYPNOSIS CAN HELP

* HOW TO STOP BEING A SLAVE TO TIME: REMAIN YOUR PRESENT AGE INDEFINITELY - WITHOUT OTHERS KNOWING

* HOW A "CHARMED" AND TROUBLE-FREE LIFE IS POSSIBLE

* REINCARNATION CAN BE STOPPED. SOME LITTLE UNDERSTOOD TRUTHS ABOUT "KARMA"

* YOU DON'T NEED THE AFTERLIFE AND IT DOESN'T NEED YOU

The authors do not say that their book is going to make you live forever: only you can do that. What you do, or how you react, to the information in this book is a matter only you can decide. You may still disbelieve everything after you have read it, but you will find it hard to deny that it has given you something really challenging to think about. Some of you will doubtless be deeply impressed by its content, but will still fail to avoid death. A few others of you, however, may never reveal what you have achieved. 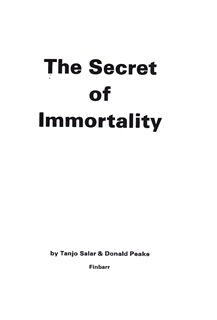