52 Talismans With The Alleged Power To Cure Health Problems

This is a controversial publication. We are prohibited from advertising it in the national media (so much for 'free speech') on account of its health claims. Not so much a book, this publication contains 52 printed talismans, originally sold individually at $10 each. Now all are assembled in one complete set at an affordable price.

Let us quote this publication's preface 'All talismans have been tried and tested by various people, including the compiler, proving to be very effective'. It goes on to say that 'results can be obtained in ten days'.

There are no 'magic words' involved and no complicated rituals. The talismans are carried in one's pocket, wallet or purse for ten days. They are also to be placed under one's pillow.

These strange talismans, whose origin may be ancient Middle East, remain powerless until activated. The activation is explained and can be carried out within a few moments.

No visualization is required; nor positive thinking.

This is 'magick' alone. No belief is required; either they will work or they won't. Certainly it is Mr. Pike's absolute conviction that they will work, based on his observation and experiments.

Mental conditions are also provided for, such as paranoia, depression, anxiety and nervousness, addiction, stuttering, panic attacks, claustrophobia, agoraphobia. Even conditons such as female infertility and impotency are provided for.

It is our duty not to suppress this information but to make it available so that the public can judge for itself. 'MYSTICK MEDICINE: 52 HEALTH TALISMANS'. 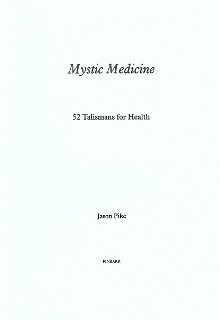