COLOUR liberates the body's healing energies like nothing else can!
Description

THE MIRACULOUS POWER OF COLOUR HEALING
by Sheila Lovejoy

No less than 14 doctors and consultants told her she would probably never regain her sight and that she would have to live with the injuries for the rest of her life.
After two weeks of the Miraculous Power of Colour Healing, her sight began to reappear, her migraines stopped and her seizures had become less and less. After another three weeks, there were no more seizures; her eye sight completely restored!
Her amazing story became the inspiration for this booklet by Sheila Lovejoy.
Author Lovejoy got rid of a back pain that had lasted nine years in just one week, after using the Miraculous Power of Colour Healing! A hearing defect, accompanied by a relentless ache - which she was told she had to 'live with' - disappeared after 18 days!
COLOUR liberates the body's healing energies like nothing else can! Anyone can do it! The techniques takes only minutes a day to perform.
A six year old child suffered up to three asthmatic attacks a day. His mother applied the technique and after a week he had no more attacks!
He was later diagnose as 'completely cure' - the doctor couldn't understand what had happened!
YOU CAN USE THIS MIRACULOUS POWER TO HEAL NOT ONLY YOURSELF NUT OTHERS TOO!
AND IT TAKES ONLY MINUTES EACH DAY!
Whatever your condition, you can apply the Miraculous Power of Colour Healing!
Fractures, broken bones, ulcers, sinus problems, nervous stomach, the common cold, kidney and liver disease, gallstones, burns - all respond to the colour treatment.
Bad habits can be stopped in their tracks with this miraculous power!
A man, only 30, could not stop drinking. He was told he would never see 40.
After only seven days his cravings ceased!
A year later he still hadn't touched another drop, despite losing his father to whom he was very close!
A young woman's nervous stomach was playing havoc with her life. Her mother three thousand miles away, applied the Miraculous Power of Colour Healing to help her. When they next spoke on the phone, the young woman reported an immediate improvement.
Two weeks later, the problem had vanished - and after another two weeks had not returned!
Time and distance are no barrier to this miraculous healing energy!
A teenage girl was so shy that she refused to go out. Her mother applied this power and was astonished to find the girl's character transformed after only five days! She had become a new person, brimming with confidence!
Previously there had been tensions between mother and daughter, these too were totally eradicated after using the technique! Now they are the best of friends!
A 59 YEAR OLD MAN CURED HIMSELF OF EIGHT DIFFERENT ALLERGIES WITH THIS TECHNIQUE!
A woman healed herself of ten years of bursitis in just two weeks of using this miraculous power!
A 70 year old labourer had suffered stomach pains seven years. Scans, tests, etc, could not reveal the source of the problem. Doctors told him he just 'had to live with it'. Medicine didn't help. he could never feel comfortable - the pains were always there.
AFTER ONLY TEN MINUTES OF USING THE MIRACULOUS POWER OF COLOUR HEALING HE EXPERIENCED RELIEF!
Three days later, the pains had disappeared - never to reappear!
Both mind and body respond to colour.
PSYCHOLOGICAL PROBLEMS CAN DIMINISH AND DISAPPEAR - THANKS TO COLOUR HEALING!
Self-confidence can soar! Shyness disappear! Anxieties vanish!
Gout, Skin disorders, hair loss, weight problems - all can be treated to dramatic effect with the Miraculous Power of Colour Healing!
Each and every condition, be it mental or physical, is controlled by a specific colour, all explained in this booklet.
Colour even enables one to IDENTIFY HEALTH PROBLEMS BEFORE THEY OCCURE - AND STOP THEM OCCURING.
This you can do, not only for yourself, but for your loved ones too!
Every disorder of mind and body respond to colour!
You are not condemned to be forever ill. You are not condemned to suffer mentally and emotionally. THE MIRACULOUS POWER OF COLOUR HEALING liberates mentally and physically!
It can free your loved ones! You can see both health and happiness return to their lives!
Depression can be miraculously lifted!
Happiness restored!
Fatigue banished!
You are always shown how to have a constant supply of energy and vigour, no matter what your age. You will find it so easy with this miraculous technique! 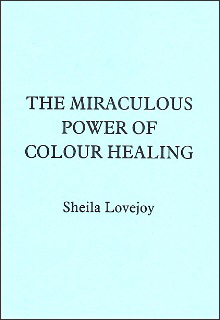