To us this seems a strange volume, for it reads of things that seem staggering beyond belief. Yet the ‘Miracle- Making Mummy’ of Cairo was an international sensation in the 1920s & 1930s, as thousands upon thousands of people reported endless ‘miracles’ by virtue of only seeing or touching this mummy. This volume reproduces the actual scientific and medical reports that were published at the time, along with general press reports.

The mummy was that of a priestess of Hathor, some 2500 years before Christ. Sight of it ‘guaranteed’ healing of even the most dire health conditions, the finding of lost objects, wealth, amazing good luck … you name it, this miraculous mummy seemed to make it happen!

Amongst the reports here are the London spiritualist who sought to communicate with the ancient priestess, and the endless posturing of collectors and the powerful in their bids to possess the relic.

Book includes photos of the actual mummy – even the mere sight of this had the power to affect one’s fortunes, some believed, and its hand … still warm after 4500 years!

It reads like fiction … except that it’s not. Science does not have the answer to everything and some things are completely beyond explanation. Read this book and be amazed! 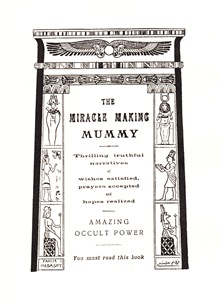