MAKING OF A GOD

And Other Works of Black Art
Description

THE MAKING OF A GOD AND OTHER WORKS OF BLACK ART

The Lost Writings of Basil Crouch

CONTROVERSIAL! TABOO! NOWHERE ELSE SUCH INFORMATION AVAILABLE! ONLY SOURCE FOR ‘THE SECRET OF SHOON’

James Finbarr writes:
Let me make it clear straight away: this is a booklet of black magick.
I MOST DEFINITELY DO NOT RECOMMEND IT TO THE AVERAGE READER FOLLOWING THE RIGHT HAND ‘WHITE’ PATH.
For anyone of a nervous disposition, application of the magick in this booklet could be POSITIVELY DANGEROUS.
I have had this information in my possession for 25 years and have only now decided to release it, for it was Basil Crouch’s wish that it should not die with him.
HE WAS THE CUSTODIAN OF TABOOED MAGICK – MAGICK YOU CANNOT FIND ANYWHERE ELSE.
Essentially this is a work of atavistic African magick and European demonic evocation.
At its core is the making of what he calls ‘The Fetish’, which anyone of average intelligence can make.
The Fetish is nothing less than an idol – but in point of fact he claims it to be infinitely more. IT IS NOTHING LESS THAN THE CREATION OF A GOD!
‘It can grant you anything you want’, he claims.
‘It has power over life and death. It can cause storms; it can wreak havoc. It can cure the incurable. It can make the magician rich.’
Of itself The Fetish is an inanimate object, but once imbued with ‘the magick of Shoon’ it lives.
Mr Crouch says it may even literally SPEAK to you!
What on earth can this be? How can it be so?
Mr Crouch was not a mad man. On the contrary he was a vigorous sceptic, debunking many claims for the supernatural. But he had made a life-long study of the strange powers hidden within the human mind, going beyond mere psychology to the psyche’s darker recesses. And he went further.
BUT I REPEAT: THIS IS NOT MATERIAL FOR THE AVERAGE READER.
According to the mysterious ritual of ‘Shoon’, The Fetish can exercise such power because it absorbs the ‘Universal Mind’. ‘Make. no mistake about it’, he says, ‘there is a Universal Intelligence – which is not the same thing as the Christian “God” – which will work convincingly and unfailingly for you.’
According to him, THE GOD CAN WIELD EXTRAORDINARY POWER, AND CAN GRANT THE MAGICIAN’S EVERY WISH. But it is no plaything. The consequences of not treating The Fetish with respect can be fatal. Treated respectfully, it can safeguard and protect the magician.
AGAIN, I REPEAT, IT’S NOT FOR EVERYONE.
INDEED, IT’S NOT FOR MOST.
DON’T PURCHASE IF IN DOUBT!
If you purchase solely out of curiosity or to access taboo information available nowhere else, that is your choice. You don’t have to proceed with making The Fetish. But at least you will have the ‘knowhow’ at your fingertips should anytime you wish to do so. BUT MERELY READING THIS OR OWNING THIS BOOKLET WILL SCARE SOME.
You have been warned!
The extraordinary content includes: Man Becomes Bankrupt, Has Nervous Breakdown: Life Transformed Through the Magick of Shoon – Child Badly Injured In A Terrible Accident, Left With No Productive Future: A ‘Man From Nowhere With Secret Power Changed Everything’ – How to Own & Control The Soul of Another – The Man Who Never Lost A Bet – Case Histories, Which Are Authentic?, Which Are Fake? – Young Man Dying From Incurable Disease: Through The Magick of Shoon Symptoms Disappear; Doctors Dumbfounded – The African Fan-Shaped Destiny Enables Young Man to Grow Stunted Limbs – The Fetish Can Kill Any Living Thing – Its Power to Both Heal & Destroy – The Doorway to Realms Unknown to Humanity – The Church Would Excommunicate You for Merely Reading This – Dedication & Evocation Ceremonies – A Living God in Your Very Midst – Becoming Adept At Hypnotism & Mind Manipulation – Receiving Protection – Receiving Riches & Honours – Controlling Demonic Forces – The Nameless One Of The Abyss – The Barren Woman Who Conceived A Child – The Man Who Vanished Into Thin Air … Literally – Woman Averts Amputation of Arm And Becomes Completely Healed – Aliens In Rwanda? – Deadly Magick of The Egyptian ‘Witch Queen’.

Limited edition. Please note: internet prices of up to $200 a copy are not authorised by us.

This is a Black Magick Book. 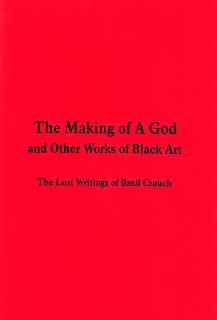