Back to - Mind Power

I WAS ALWAYS POOR

But now people envy me.
Description

"I WAS ALWAYS POOR - BUT NOW PEOPLE ENVY ME. I STILL CAN'T GET OVER IT"

My name is Nancy Kline.
Perhaps the only thing that marks me off from millions of other American women is that whatever I touch seemingly turns to gold.
I cannot belive this myself but friends have started calling me 'The woman with the Midas touch'. It seems as if whatever I happen to want I just happen to get.
I do not have any 'connections' with rich people - in fact all my family and friends have always been what some would call 'poor'. I am a divorcee with two grown sons; and trying to make ends meet was never easy for me.
Until now. Or perhaps more accurately until earlier this year.
People are wondering why everything has changed in my life - so fast and so dramatically.
I am now to be remarried to a man nearly 15 years my junior; previously I could not get any man of my age to look at me, let alone want to marry me. And people say I suddenly look younger.
Not only do I look and feel younger, but I have also lost 14 pounds in weight - entirely without dieting or exercise.

MONEY FROM EVERYWHERE
Until just recently I never had money to spare - now I have much more cash than I need coming in every day.
I will tell you how all this happened in just a moment.
My son has just bought me a $10,000 automobile and $1000 spending money in cash for my birthday - until a few months ago he was almost flat broke.
My younger boy who had always been a poor student has suddenly started doing well at school - much to everyone's relief.
And a short time before writing this I received another $1000 in a royalty check from a publisher. I had always wanted to be a published writer - and now this dream has also come true.

HOW DID ALL THIS HAPPEN
It all started after I read this extraordinary story of a man whose head was lacerated by a helicopter tail rotor. He was immediately able to consciously lower his blood pressure to 130 - the doctor was astonished, for a man in his state should have had a blood pressure reading of 200 with shock setting in. The injured man needed 24 stitches; but amazingly required no medication except novacaine. This man was back at work the next day as if nothing had ever happened.
How was this man able to take control of his blood pressure and avoid shock in a terrifying incident that would have totally incapacitated any othe mortal?
Frankly I would have simply found it impossible to believe but for the fact that since reading of this case I have personally had access to this man's written testimony to his employer concerning the incident, which was corroborated by an independent witness. The fact is - as I was soon to discover - this man possessed a secret concerning the way the mind functions.
It was this 'secret' which gave him complete control over a life-and-death incident.
According to this man one can take control of the way the body works AT WILL and within seconds.
I was intrigued to say the least. But his claims went far beyond the mind's power to control the body. He claimed that within a certain phase of consciousness all of the good and beautiful things in life could be literally MAGNETIZED by the mind.
Now although I was fascinated I was also a little skeptical. These claims sounded a bit like those made for books which promise untold riches and good fortune by following their instructions. I was always a 'sucker' for such claims, and many times I had mailed money off to an advertiser feeling guilty that I had wasted my hard-earnt money in this way. When I received the books and applied the instructions nothing happened - and I was always just as poor and as unhappy as before.
But a part of me always wanted to 'believe'; secretly I had always hoped that one day I would find something that did work - something that really could change my life for the better. In fact it was this secret belief which kept me going because I was often very miserable and lonely.

MY LIFE CHANGES
I was eager to put this man's ideas to the test. His instructions took just ten minutes to carry out. Immediately I felt better in mind and body. Afterwards I suddenly felt somehow in 'control' of things. I performed the instructions every day, and after seven days I found that nothing at all could upset me.
My nerves seemed suddenly calmer. Little things that one time would make me fly into a rage no longer had any effect on me at all. The feeling was strange - and exhilarating. I couldn't understand it - for the first time in my life I felt in control of everything; and it didn't seem to require and special effort to be so! Already people were noticing the change in me - and were wondering what had 'happened'.
Deep down I knew that now - at last - my life could be about to change.

A YOUNG MAN DESIRED ME
I'm sorry to say it, but I'm not one of those 'ageless' women: my lined faced and graying hair cruelly remind me of that.
My morale hadn't been high - but after a week of trying this new 'secret' I felt sufficiently confident to try the next stage of the instructions. I wanted to feel young and desirable.
Three days later my son introduced me to an older friend of his; and I felt an instant 'chemistry' with him. But I had absolutely no idea then that after only 11 weeks he would ask me to marry him.
I don't know what has happened - but my face seems less wrinkled, and my hair seems darker. I do know, however, that it has a lot to do with the new 'secret' I am using.

THIS 'NEW' SECRET
But why were these things happening - why should my luck change so quickly like this? After all I had always failed before. So what was going on? These changes seemed to be happening because I had learnt how to attune myself to a level of consciousness unknown to most people. The man whose incredible story had got me started with all this said that 'total success and happiness' was only possible through tuning into that phase of consciouness where contact with the Universal Mind could be made.
Please let me hasten to add that this is not hypnosis. In fact there is absolutely nothing in it that would contravene anyone's religious or moral beliefs. It certainly is not witchcraft. And there are no rituals. No tape recorders. No chanting. Everything takes place within your own mind - and with perfect ease.
It is so simple that a child can do it. My little 7 year old nephew was terrified of going to the dentist. I tried an experiment with him - it took less than ten minutes. he went to the dentist cheerfully and willingly!
This wasn't auto-suggestion. He performed the instructions himself - he didn't need to say a word.

$100 EVERY DAY
I asked Universal Mind to help Rick, my eldest boy. In less than a month he got himself a job with a $28,000 salary, against all odds!
I was also shown by Universal Mind how I could make $100 a day - without leaving home! I now need my father to come in and help - and I pay him $75 a week for just a few hours' work!
My confidence now fuelled by these successes, I decided to try and interest a publisher with this secret. He balked at the idea: 'How is this so different to what's already been written in similar books?'
'I've tried other books and they didn't work', I said. 'Maybe this isn't "new" to you, but it is to me - and it worked whilst the others didn't'.
'I'm sorry, but I need more convincing than that', he replied.
'I want you to do something which will give you all the proof you need. Read the instructions carefully, follow them to the letter - and see if it can help you get an idea worth, say, $5000'.
He did what I suggested, and two days later he was beaming from ear to ear. 'You've got yourself a deal. I did what you said, and the very next morning I thought of something that could make me not just $5000 but $10,000'.

RECEIVE WHAT YOU WANT
Once you are attuned to the right phase of consciouness you can ask the Universal Mind to command whatever you want in life to happen. This goes for anything, from commanding $5000 to enter your life to finding your true soul-mate, and it happens with perfect ease - you are guided automatically and quickly by a higher source to the attainment of your goal. It is not witchcraft, and it is not hypnotism. All that occurs is that your consciousness vibrates at a different frequency; a frequency which is more relaxed and yet more alert, and brings with it the wonderful conviction that everything you desire in life will now be yours.
If all this sounds like a fairy tale to you I sympathize with what you think. Only a short few months ago I would have felt the very same. But I urge you to give it a try. Give yourself another chance. It could mean the beginning of a new and very exciting life for you.

SHY CINDY GETS HER MAN
My best friend Cindy is just 24 years old. She is so shy of men that even after the three years I've known her she still blushes when my sons are about. For some time she has been burning herself up over this guy she knew - but he was hardly aware of her existence; and she was too painfully shy to do anything about it. I share all my secrets with Cindy so she knew all about why my life had changed so much recently. She wondered if 'my' secret could solve her problem. 'You have nothing to lose by trying', I said, and showed her what to do.
A week later Cindy was dating her man!
She was over the moon at how it happened. He suddenly became interested in her - all without her trying to attract his attention!
Now Cindy is working on this secret to overcome her shyness - and she already feels much bolder!
With this secret I have made myself feel younger; I have lost weight without dieting or exercising; and I have found the guy of my dreams. And on top of that all my financial worries are well and truly in the past. I think you should at least give yourself the chance of seeing what it can do for you. 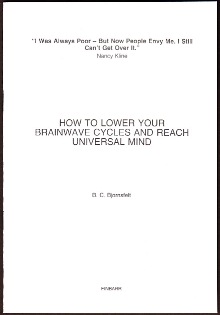