CURSE YOUR WAY TO SUCCESS

Curse bad luck out of your life!
Description

CURSE BAD LUCK OUT OF YOUR LIFE!

Curse Your Way to Success

This seems a crazy notion, but to me it isn’t. In fact to me it makes perfect sense.

Cursing is a highly effective way of directing psychic energy. Let me give you a simple and humorous example. An electrical appliance had been playing up for ages; whatever I did, it would continue to malfunction. Then one day in a fit of anger I yelled at it: ‘Curse you! To hell with you, play up one more time and I shall throw you out!’ The next time I operated it, it worked – and has worked perfectly ever since. This is not an isolated example: I have had this experience numerous times.

Of course most people assume that cursing is malicious in intent which is usually the case. But the ancients knew better: they recognized the two-fold nature of cursing. The belief was that anything considered bad can be cursed, so that good may prevail.

Cursing could just as easily be called ‘frustration magick’. This is a terrific idea. When we are frustrated we are storing up negative psychic energy which has nowhere to go. This cannot be good for us. But if we channel our frustration – not to mention our anger – in a purposeful way at a specific target this can work wonders!

For many, trying to work up the necessary psychic energy to perform a spell or ritual is not easy, but with this approach you already have the energy stored and ready to use.

Nothing comes easier than to curse!

Instead of trying to be patient with bad luck, waiting and hoping for it to turn good, with this approach one curses it!

So this book of curses by Audra re-directs frustration, making it work for us instead of against.

It is an exciting thought!

It may seem odd to some, but to the Ancients it was seen as an effective way for getting results.

This book provides ‘positive’ curses for almost every contingency. For example, the ‘New Venture Curse’ curses all obstacles in the way of initiating a venture. The ‘New Business Curse’ lambasts the pitfalls in the way of any fledgling business, whilst the ‘Business Success Curse’ targets whatever is holding one back, releasing a surge of demand for one’s product or service.

The ‘Luck in Gambling Curse’, vents one’s anger at an unlucky gambling streak. Unless the bad luck is cursed out of one’s life the good cannot come, according to the author. Similarly the ‘Money Curse’ and ‘Material Gain Curse’ blast the negative forces holding one back.

Also here is the ‘Promotion Curse’, the ‘New Job Curse’. Then there are the frustrations of the heart. One may feel at a disadvantage by one’s looks or whatever it is we feel we are lacking. Once these are cursed, an exciting new self-confidence emerges.

The tensions in a relationship can be cursed away, allowing happiness and harmony to flourish again. And if one feels ignored and unwanted, the ‘Flock to Me Curse’ changes all that, it creating a ‘killer sex appeal’, according to the author.

The ‘Friendship Curse’ targets loneliness, allowing one to attract loyal and trustworthy people into one’s life. The ‘Charisma Curse’ gives one a ‘magnetic pull’ on others, says the author.

There are various curses here for health and these may seem the unlikeliest curses, but who has not cursed sickness? What sick person has not been ‘sick’ of being unwell?

Remember, a curse has the power to heal as well as to hinder. Applied correctly a curse has more power to do good rather than a spell.

There are, however, some good old-fashioned curses for wishing ill on others. They function purely as a defensive device. If someone has seriously wronged you then you are totally justified in retaliating, and you can enjoy watching the results! Revenge is also dealt with here.

There is even a curse to maintain good health. Not as bizarre as you might think: after all, there is so much vacillating against one’s health – one’s environment, pollution, stress, etc – so why not use one’s innate psychic energy to reduce these effects and strengthen the immune system?

The ‘Doorway Curse to Pass Exams’ has the effect of removing mental blocks and stimulating memory and confidence. The ‘Hypnotic Curse to Control Others’ is inevitably controversial, for the author demonstrates how to remove whatever obstacles prevent one from controlling another. ‘Immoral’ some will say, but I don’t seek to censor the author.

Less controversially, the ‘Bulldozer Creative Curse’ bulldozes all blocks to creativity and inspiration. The ‘Power Curse’ damns any sense of being powerless. The object of this curse is to enable one to feel that true power and control of one’s life is possible if it is pursued.

Another galvanising curse is the ‘Movie Star Curse’: this enables the curser to assimilate the attributes of some famous person and bring those attributes into play in everyday life. This is not as unlikely as it seems, for this is magick.

If you are ready for something different, something that will take you in a new and exciting direction, then you should get ‘CURSE YOUR WAY TO SUCCESS’. 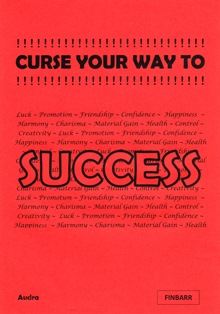